In 1907 Crowley began the tradition of issuing a new “Word” at each equinox.  These were sent to each member of the A∴A∴ (Neophyte and above) in good standing.  Commonly issued on Crowley’s personal stationary featuring his “Mark of the Beast” or a lamen of the O.T.O. imprinted in red.  Sometimes sent on unmarked paper or in a hand-written letter but most often typed on small pieces of stationary.

The manner in which Crowley received each of these oracular Words varied from equinox to equinox.  While many were derived utilizing a sex-magick rite of one sort or another, there was no consistency in the method.  Sometimes the Word was chosen days before the actual Equinox and at other times after – working alone or with others.  At times, he would “hear” the Word, in other instances the Word was given through an assistant or received in a vision.  There is also a versified Ritual of the Ceremony of the Equinox incorporating aspects of the Neophyte ritual which remains unpublished and was utilized by Crowley on certain occasions.  Many Lineages carry on with this tradition, in one form or another, today.

To the Word of the equinox Crowley would append an Oracle and an Omen, a practice he began in the early 20’s.  The Oracle was chosen via bibliomancy.  That is, he would open a Holy book to a random page (most often Liber AL) and using either his thumb or ring, (at times just dropping his signet ring of Ankh-af-na-khonsu on the open page), and where ever his thumb or ring came to rest was the Oracle given for that Equinox.  The Omen was a Yi King reading utilizing a unique method developed by Crowley.  (for details see Crowley’s Yi King Sticks in our “Vault”)

I have compiled a near complete list of all three aspects – being the Words, Oracles and Omens of the Equinox for each year from 1907 until Crowley’s death in 1947.  This is the most complete list published to date.  Thus far all 82 of the Words have been identified, 49 of the 54 Holy Book Oracles and 42 of the 51 Yi Omens. 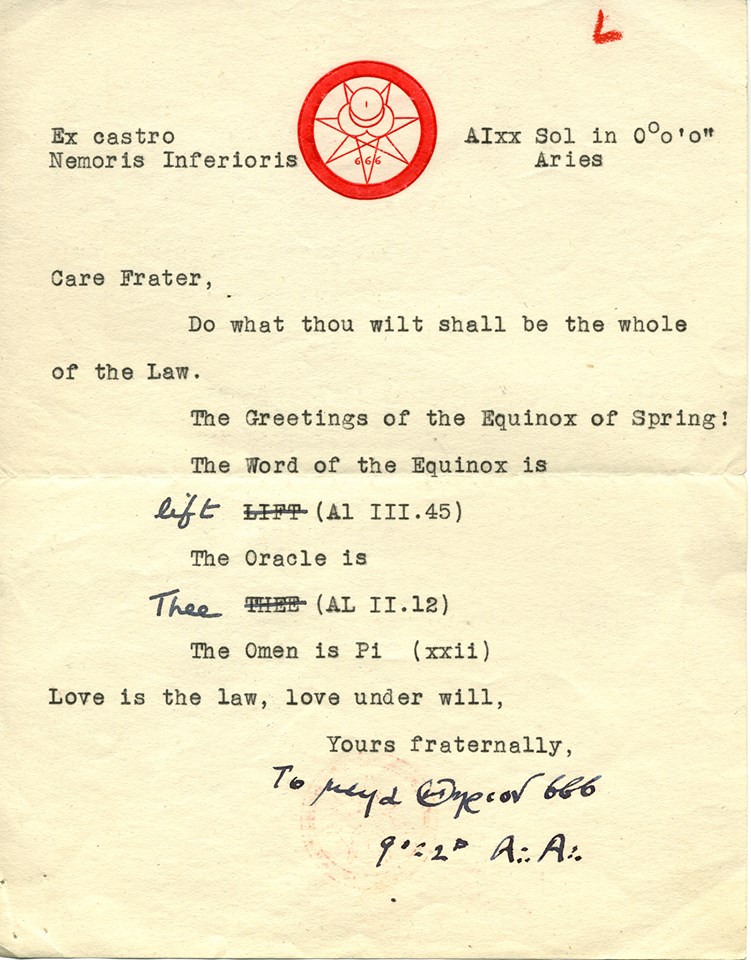 This sample is typed on Crowley’s personal stationary, measuring 5 1/2″ x 7″ and Headed with ‘Ex castro Nemoris Inferioris’ – An Ixx Sol in 0 degrees Aries, which is the Spring of 1946 (however this is a typo and should be dated the Spring of 1947).  It is addressed ‘Care Frater’ and begins and ends with the full Thelemic greetings. It includes the ‘Word of the Equinox’ (lift), the ‘Oracle’ (Thee) – both derived from Liber AL (presumably by bibliomancy) and the ‘Omen’ (Pi 22).  It is singed by Crowley – To Mega Therion 666 9º = 2º A∴A∴ – It was not uncommon to see Crowley make corrections or add comments to these forms which were often prepared by others and at times contained typos.  Here we see Crowley following to the letter what is written in Liber AL and correcting the words originally typed completely in capitals.