Eleven years ago today Phyllis Seckler, AKA Soror Meral, Celebrated her Greater Feast. She was the first Thelemite I ever knew and the first I called teacher, but most importantly she was a dear friend. Someone who taught me how to BE a Thelemite.

Phyllis was initiated into the O.T.O. in 1939. With Crowley’s consent she was received as a Student of the A∴A∴ under Jane Wolfe in 1940. She would later be elevated to 5=6 of the A∴A∴ and a IX degree of the O.T.O. by Karl Germer: who was himself directly appointed by Aleister Crowley. When Germer died in 1962 Soror Meral was the most senior member of the A∴A∴ and continued on in this work right up until her own death in 2004.

Phyllis also married Grady McMurtry (albeit in Mexico) and together they worked to reconstitute the O.T.O. as we have it today. She would also receive Grady as a Probationer of the A∴A∴ in 1970. Several years later Grady swore the Oath of the Abyss and shortly thereafter Phyllis moved to expel him. But Grady now claimed a Grade higher then her own. For this and many other reasons their relationship was turbulent for the remainder of Grady’s life and Phyllis never accepted his claims in regard to A∴A∴ – Yet what can’t be denied is the absolute influence these two would have on the modern Thelemic landscape.

Though not always in agreement, Phyllis work has none the less spawned at minimum four current and active claimant groups of the A∴A∴ and I personally applaud all those who carry on in her stead. Counting among my dearest friends, members throughout these groups, I can assure you that one thing we can all agree on was her Light. She is missed and her influence profound.

Yesterday I visited with some dear friends in northern CA and at some point of the evening the conversation turned to Phyllis and we shared stories of our memories of her and looked at some pictures of her house and garden… and I was reminded just how wonderful of an astrology teacher she was as I recounted a story of how she often (at random) would pull the chart of some famous person, but without the persons personal information attached, and charge us with the task of identifying the individual based upon their traits; an exercise I much enjoyed and it sure beat listening to those Regardie tapes of hers.

The final photo in this set is of two of Phyllis personal temple implements. One always kept in her Fire alter and the other always sat upon her Water alter. These were her implements of Consecration and Purification. They were given to her by her Teacher Jane Wolfe who carried them with her in Cefalu when she was doing her A∴A∴ work under Crowley.

1) Phyllis at Golden Gate Park
2) Making a toast
3) In her Temple (which was located in her basement)
4) Jane and Phyllis’s Water and Fire implements. 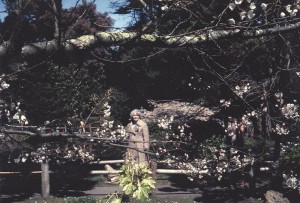 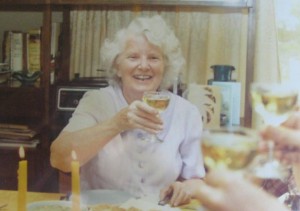 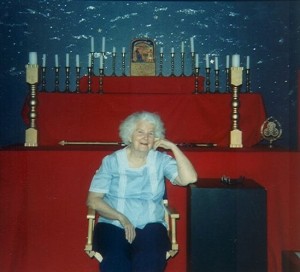 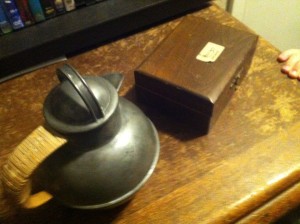