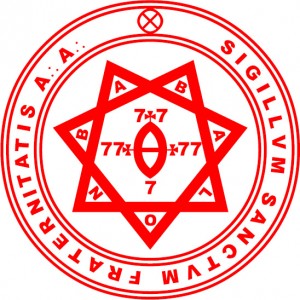 A∴A∴
Publication in Class B

i. Stand upright, feet together, left arm at side, right across body, holding the wand or other weapon upright in the median line. Then face East and say:

iii. Extend the arms in the form of a cross, and say: “The Sign of Osiris Slain.”

v. Raise the arms at an angle of sixty degrees to each other above the head, which is thrown back, and say, “The Sign of Apophis and Typhon.”

vi. Cross the arms on the breast, and bow the head and say, “The Sign of Osiris Risen.”

viii. With the magical weapon trace the Hexagram of Fire in the East, saying, “ARARITA” (אראריתא).
Which word consists of the initials of a sentence which means “One is His Begining: One is His Individuality: His Permutation is One.”
This hexagram consists of two equilateral triangles, both apices pointed upwards. Begin at the top of the upper triangle and trace it in a dextro-rotary direction. The top of the lower triangle should coincide with the central point of the upper triangle. 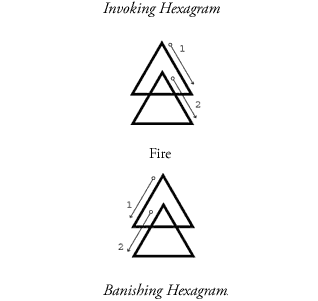 ix. Trace the Hexagram of Earth in the South, saying “ARARITA.”
This Hexagram has the apex of the lower triangle pointing downwards, and it should be capable of inscription in a circle. 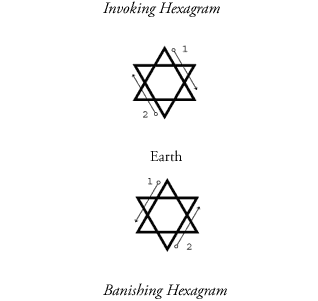 x. Trace the Hexagram of Air in the West, saying “ARARITA.”
This Hexagram is like that of Earth; but the bases of the triangles coincide, forming a diamond. 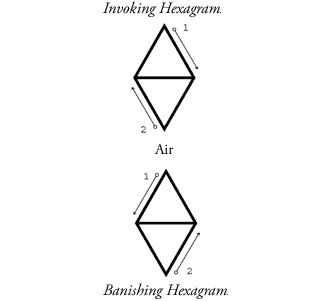 xi. Trace the Hexagram of Water in the North, saying “ARARITA.”
This hexagram has the lower triangle placed above the upper, so that their apices coincide. 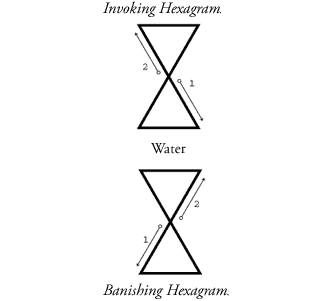 xii. Repeat (i-vii).
The Banishing Ritual is identical, save that the direction of the Hexagrams must be reversed.

* Iesvs Nazarenvs Rex Ivdæorvm. “And Pilate wrote a title, and put it on the cross. And the writing was, Jesus of Nazareth the King of the Jews” (John 19:19).