The Winds of Wisdom

REVIEW – THE WINDS OF WISDOM 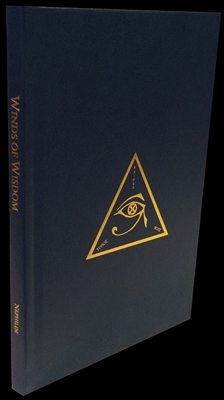 Earlier today a good friend delivered me Shoemaker’s new book “The Winds of Wisdom”.  I have now sat with it for approximately three hours which in this case is a fair amount of time being that the book is only about 120 pages – but as with much in life it’s about quality and not quantity.

The book itself is nicely made, bound in an azure blue buckram with gold gilded spine and cover with matching blue ribbon and limited to 500 copies.  Available for purchase directly from Nephilim Press at www.nephilimpress.com.

The first thing I should point out is that this book is by no means a comprehensive overview of the Enochian system nor does it make any pretense to be.  In fact, those without a working knowledge of Enochian may want to dedicate some time acquainting themselves with the system before approaching this book otherwise little will make much sense.  Shoemaker recommends Lon Milo Duquette’s book “Enochian Vision Magick” for this purpose.  I myself having not read this title (sorry Lon) cannot give an opinion – but knowing Lon’s expertise (having personally scyred several aethyrs with him) and being familiar with much of Lon’s writings – I’m certain this recommendation is sound.

The book gives little information outside of Shoemaker’s personal visions of each Aethyr.  However, that is the objective of this book and his visions are symbolically consistent with what one might traditionally attribute the aethyrs.  A few footnotes are added to each vision which elaborate upon the authors unique experiences and an “interpretive note” (about a page in length) is appended to the 7thAethyr – DEO.  Also provided is a recommended scrying method that (based upon personal experience) appears to be sound, practical and I’m sure effective.

There is also a rather explicit description of a sex-magick ritual used while scrying the 8th aethyr of ZID based upon techniques discussed in Crowley’s Eroto-Comatose Lucidity – chapter “15” (of 22) from liber CDXIV “De Arte Magica” – A document related to the Mysteries of the 9th degree OTO.

Interestingly, Shoemaker employs a system in which each of the aethyrs is attributed to one of the ten Sephiroth across three separate Trees of Life – each representing one of the Qabalistic worlds.  In this case Atziluth, Briah and Yetzirah; or the Archetypal, Creative and Formative stages leading up to manifestation from the highest to the lowest (YHV).  For those of you unfamiliar with the Four Worlds, they are derived from Isaiah 43:7 and only need to be referenced in a few of the standard Qabalistic resources to understand how they work – (If you are familiar with the formula of YHVH you have good start).  In any regard, this system is not that envisioned by Crowley who actually considered a couple different models and it’s debatable as to if he truly settled on just one.  (Crowley of course received the visions first and then later tried to project them unto the Tree of life).  Being that one’s experience of the aethyrs is a highly personal and therefore subjective matter it makes sense that different interpretations as to how to map the aethyrs unto the Tree would evolve.  Furthermore, it took me years to wrap my head around Crowley’s breakdown while the one suggested here immediately “fell into place” and I think easily adaptable by students of the western mystery schools.

In conclusion, I would recommend this book to anyone who is exploring the Enochian system.  Most especially those who intend on scrying the aethyrs.  You will of course need a few other resources and some time in actual practice before truly appreciating the material offered here – yet “The Winds of Wisdom” is one of the few resources you can turn to for a personal account of the aethyrs and this alone makes it worth picking up.  I am certain it will find a home on the shelf of many scholars, students and aspirants.  On a personal level, it’s my favorite of Shoemaker’s publications thus far – though easily the most specialized.