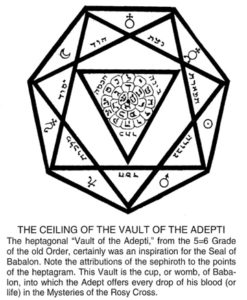 This Seal first appeared in Book 4, Part I (1911). It did not appear anywhere in the first volume (first ten numbers) of THE EQUINOX.

The central part—the seven-pointed star and its embellishing features—also appeared in Crowley’s The Book of Lies (1913), Cap. 49. By itself, it is called the Seal, or Star, of Babalon.

The heptagram is an ensign of the Great Order at every level. It is the pattern of the Seven ­Branched Candlestick, the Vault of the Adepti, and the seal upon the gates of the City of Pyramids—demarcating, respectively, admission to the First Order, the Second, and the Third.

With two points uppermost and one point downward, the heptagram assumes a distinctly feminine quality. This is reinforced by the pre­dominance of the name BABALON, which is the basis of this entire seal. BABALON is a holy name associated with Binah. She is essentially equivalent to Shakti, or to the most ecstatic formulations of the Shekinah. BABALON can be studied deeply in The Vision & the Voice (Liber 418). For now, it is only important that you understand that she is the manifestation of that Reality which betokens admission to the Third Order; that Her name consists of seven letters; and that it enumerates to 156.

The seven-pointed star refers, among other things, to the seven letters of Her name, which are placed within the points of the Star. (The point of the heptagram at which the name begins is, by Hermetic tradition, attributed to the Moon, to the Hebrew letter Gimel, and to the Tarot Trump whose esoteric name is “The Priestess of the Silver Star.” This may or may not have been intended in the original design of this Seal.)

Before going further, I must digress to explain one of the entertainments and, simultaneously, an exercise in mental discipline with which Crowley and his friend Oscar Eckenstein occupied themselves on mountain climbing excursions (presumably not during the actual climbing). They would attempt to represent any number soever by employing the number 4 exactly four times, in combination with any mathematical symbols they chose. For example: 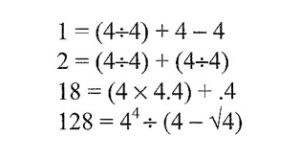 Crowley recorded that, by this device, they had succeeded in generating every number (every positive integer) up to about 170 except 113; and from there to about 300 with very few gaps.

This is relevant to the present discussion because the Sigillum Sanctum of the A∴A∴ is formed on a similar principle, using the number 7 seven times.  Remembering that the name BABALON consists of seven letters and enumerates to 156, we find that:

By taking slight artistic license with the size and distribution of the numerals and mathematical symbols, we obtain the following:

Virtually no imagination is required to bridge between this and the final design: 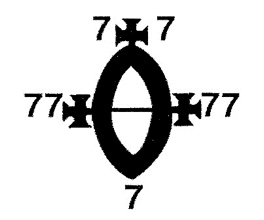 Therefore, in addition to the geometric symbolism of the heptagram, a divided Vesica Piscis, and the three crosses, we have important mathematical and artistic symbolism whereby the design represents the name BABALON itself, as ensign of the Third Order. This, then, is the heart of that image which has been adopted as the seal—the sigil—of the Great Order itself.

Love is the law, love under will.

*Excerpted from  The Mystical & Magical System of the A∴A∴ by James A. Eshelman (All rights reserved)

For more of Jim’s writings, visit thelema.org, and the message board at heruraha.net