Imprimātur is Latin for “let it be printed”. The term has been widely used by the Catholic Church in two senses: a) in old times, for authorizing the publication of a book, otherwise to be censored; b) in modern times, as an endorsement of the contents of a book, stating they represent the view of the Church. The Imprimātur must be issued by a proper Authority from the Church.

In A∴A∴, the Imprimātur is used as a way to issue certain writings as official instructions of the Order, and in most of the cases it also assigns a number and a class to that instruction.

An official instruction of A∴A∴usually is called a liber, Latin for “book”, and its plural form is librī, “books”.

Most of the librī of A∴A∴and O.T.O. are assigned to a Roman number:

“Title sub figūra x” is Latin for “Title under the number x”.

Those numbers do not follow a sequential order: A Note on Genesisis attributed to the number MMCMXI (2911), but it is not the 2911th official instruction of A∴A∴.

Actually the numbers are chosen as a reference to the nature of the liber itself:

In The Equinox Vol. I No. 10, Crowley explains the A∴A∴classification system:

The publications of the A∴A∴divide themselves into four classes.

Class “A” consists of books of which may be changed not so much as the style of a letter: that is, they represent the utterance of an Adept entirely beyond the criticism of even the Visible Head of the Organization.

Class “B” consists of books or essays which are the result of ordinary scholarship, enlightened and earnest.

Class “C” consists of matter which is to be regarded rather as suggestive than anything else.

Class “D” consists of the Official Rituals and Instructions.

Some publications are composite, and pertain to more than one class.

When the A∴A∴was founded, it inherited the three ruling offices from its predecessor Order, the Hermetic Order of the Golden Dawn. Such offices are explained in the Ritual of the Neophyte of the  H.O.G.D. as published in The Equinox Vol I. No. 2:

At the East of the Temple before Paroketh sit the three Chiefs who govern and rule all things and are the viceroys in the Temple of the Second Order beyond. They are the reflections therein of the 7°=4°, 6°=5°, and 5°=6° Grades, and are neither comprehended in, nor understood by, the Outer Order. They represent, as it were, Veiled Divinities […]

Now the Imperator governeth, because in Netzach — which is the highest grade of the First Order — is the fire reflected from Geburah.

The Praemonstrator is second, because in Hod is the water reflected from Chesed.

The Cancellarius is third, because in Yesod is the air reflected from Tiphereth.

But in each Temple these three chiefs are coeternal and coequal, thus figuring the Triad in Unity, yet are their functions different:

The Imperator to command

The Cancellarius to record.

Other functions are mentioned, for example: Chancellor (see the first pages of The Equinox Vol. I Nos. 7-10), Praemonstrātor-General (see Book Four Parts 1 and 2), and Grand-Neophyte (see One Star in Sight), but we do not have much information on them.

Certain librī list officers in the Imprimātur page, others don’t.

At the time A∴A∴was founded, these were the three chiefs of the Order, ruling from the Collēgiō Internō (Inner College) and authorizing all official instructions:

The Chancellor of the A∴A∴ wishes to warn readers of The Equinox against accepting instruction in his name from an ex-Probationer, Captain J. F. C. Fuller, whose motto was “Per Ardua.” This person never advanced beyond the Degree of Probationer, never sent in a record, and has presumably neither performed practices nor obtained results. He has not, and never has had, authority to give instructions in the name of the A∴A∴.

In 1919, a new governing triad was announced in The Equinox Vol. III No. 1. Now the Chiefs were chosen from the External College (prō Collēgiō Externō):

Note that these are all magickal mottos for Grades below Tiphereth.

George Cecil Jones was no longer involved with A∴A∴since around 1911, but Crowley still recognized him as the source of instruction.

As far as 1936 (The Equinox of the Gods), this was the governing Triad of A∴A∴, although Charles Stansfeld Jones was no longer active in A∴A∴and even joined the Roman Catholic Church in 1928. In 1936 he was officially expelled from the O.T.O. after starting to publicly attack Crowley and Thelema.

In July 18, 1941, Crowley appointed Karl J. Gemer as his representative:

All persons in authority under me in connection with the A∴A∴ and O.T.O. are to recognize him as their chief.

Usually the Imprimātur is issued from the Second Order (Collegio Interno), but there are also instances including authorities from the Third Order and even officers from the First Order:

Thus, for example, where we read “Pro. Col. Sum.” (prō Collēgiō Summō) it is meant “on behalf of the Highest College”.

The Seal of A∴A∴

Around 1912, the Seal of A∴A∴was designed and published for the first time in Book Four Part I (Liber ABA, Part 1: Meditation). Its Seal was only going to figure as part of the Imprimātur page on 1919, with the release of The Equinox Vol. III No. 1.

The Egyptian portal figuring as the cover of many A∴A∴ librī was designed in 1909, figuring in the privately printed volumes of ΘΕΛΗΜΑ, composed by most of the Holy Books of Thelema. However, the portal design only became public with the release of The EquinoxVol. III No. 1 in 1919. See the images below, the 1909 portal on the left and the 1919 portal on the right:

The Egyptian hieroglyphs at the bottom of the cover came from the Stele of Revealing:

At times when no governing triad was formed, Crowley employed the “N. Fra. A∴A∴” as the authority for an Imprimātur. Let’s consider some information regarding that obscure authority:

Considering these, N. Fra. A∴A∴seems to mean “Nemo, Frater of A∴A∴”, Nemo being a generic term for a Magister Templi, in this case Aleister Crowley.

We have representatives from three separate colleges here, plus O.S.V. as Imperātor. Curiously the offices of Cancellārius and Praemonstrātor are not indicated.

We have the three chiefs with their Grades. Their offices are not indicated.

Now we have the chiefs and their respective functions:

In this sample the Grades are omitted; we only have the offices:

Here the word “Imprimātur” is used:

This book was privately printed. In the photo below, we can see Crowley’s handwriting, probably revision marks to guide the editor for including it in The Equinox, Vol. III, No. 2, a book which was announced, but never released. Here Equinox No. 1 actually refers to The Equinox Vol. III No. 1, and in the page 100 is found the Imprimātur for De Lege Libellum.

Here we have a curious variation that makes us speculate about the meaning of “N. Fra A∴A∴”. Clearly we have someone named “N. ·.·” who has the office of a “Praemonstrātor General”. Giving the many references to “Nemo” as a generic name for a Magister Templi, it may be possible that this “N.·.·” is “Nemo ·.·”.

Liber NV and Liber HAD have this peculiar Imprimātur, where we have the Egyptian hieroglyphs for “the gods”, followed by V.V.V.V.V. (Aleister Crowley’s 8○=3□motto and/or the Chief of A∴A∴), N. Fra A∴A∴(mostly used when no governing triad exists) and O.M. (Aleister Crowley’s 7○=4□motto).

Now we finally have a new governing triad in A∴A∴ and representants from all three colleges, but the chiefs operate from the External College, not from the Inner College as in 1909. Note that George Cecil Jones, long gone, is still referred to as the Praemonstrātor.

1929, Magick in Theory and Practice

Book Four Part 3, Magick in Theory and Practice, has no Imprimātur page. It includes appendices with the main official instructions issued by A∴A∴, most of them published in The Equinox, but none of them include an Imprimātur.

Here D.D.S. (George Cecil Jones) was replaced by I.W.E. (Martha Küntzel) in the Inner College, but he remains as V.N. and as Praemonstrātor in the External College.

Curiously here we have two mottoes listed as members of the R.R. et A.C., the second order of the old Hermetic Order of the Golden Dawn. Allan Bennett was one of Crowley’s teachers in H.O.G.D., but he was dead and he has never been a member of Crowley’s A∴A∴.

1961, The Equinox, Vol. III, No. 6, Liber Aleph: The Book of Wisdom or Folly, edited by Marcelo Ramos Motta

This is the first number of The Equinox released after Crowley’s death, in a partnership between Karl Germer and his student Marcelo Motta. This book was edited and printed in Brazil, and sold in USA. Germer never entitled Motta as the Imperātor of A∴A∴, but at the time of the release of the book Motta sent letters to Germer claiming to be a 6○=5□in another plane, the grade corresponding to the office of Imperātor.

1980, The Equinox, Vol. V, No. 3: The Chinese Texts of Magick and Mysticism, by Marcelo Ramos Motta 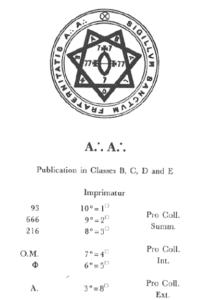 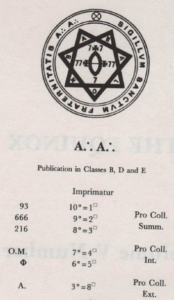 Need a picture of the Imprimātur page– believed to be the same as listed below.

After issuing the four numbers of his new volume of The Equinox, Motta fallbacks to the usage of “N. Frater A∴A∴”.

This is the last Imprimātur issued by Motta:

Here we have an Imprimātur in the name of an organization, Horus-Maat Lodge.

1996, The Equinox, Vol. IV, No. 1: Commentaries on the Holy Books and Other Papers, by J. Daniel Gunther et al, Liber Vesta

Nine years after Motta’s death, three of his ex-students, all of them who resigned or were cut contact with from Motta’s instruction in A∴A∴while he was still alive, formed a new governing triad for their A∴A∴claimant group:

1998, The Equinox, Vol. IV, No. 2: The Vision and the Voice with Commentaries and Other Papers, by J. Daniel Gunther et al.

Here we have the same governing triads, with no grades or colleges:

2000, The Mystical and Magical System of A∴A∴(3rd Revised Edition), by James A. Eshelman: One Star in Sight.

Here we have three people from second order rankings and “N. Fra. A∴A∴”:

2009, Initiation in the Aeon of the Child, by J. Daniel Gunther

In his solo book, the Praemonstrātor of one of the claimant groups above listed himself as in “R.R. et A.C.” plus “N. Fra: A∴A∴”, as Crowley did in his last years. We have no information regarding his association with the actual R.R. et A.C., the second order of the old H.O.G.D. Perhaps he meant the R∴C∴, the second order of A∴A∴. 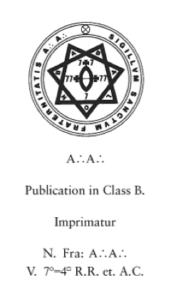 2017, Winds of Wisdom, by David Shoemaker

Here we have three officers in the External College, representatives in the Inner College, and the exquisite “N. Fra. A∴A∴” in the Highest College. 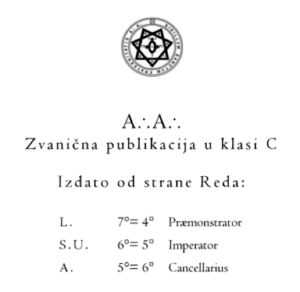 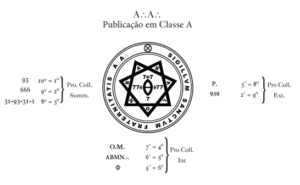 Love is the law, love under will.

CROWLEY, Aleister. The Equinox of the Gods, being Book Four, Part IV; and The EquinoxVolume III Number 3. London: Privately published, 1936.

CROWLEY, Aleister. The Heart of the Master. London: Privately published, 1938.

CROWLEY, Aleister; et al. The Vision and the Voice with Commentaries and Other Papers, being The Equinox Volume IV Number 2. York Beach: Samuel Weiser, 1998.

ESHELMAN, James A. The Mystical and Magickal System of A∴A∴. College of Thelema: 2000.