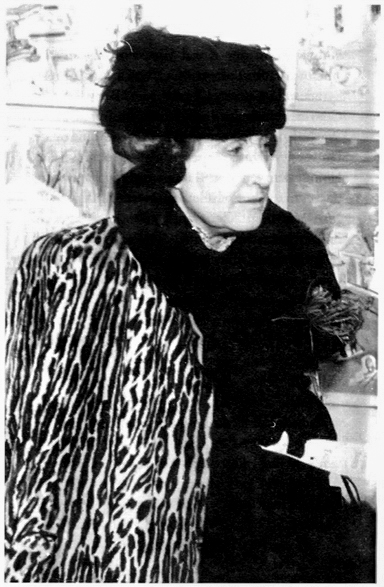 Marguerite Frieda Harris (1877 – 1962): British artist best known for her paintings of Crowley’s Thoth tarot.  She had a life long interest in spiritual matters and was drawn tothe teachings of Christian Science founder Mary Baker Eddy (1821–1910).  In the late thirties she began to study Anthroposophy and the writings of Rudolf Steiner (1861–1925).

In 1937 Aleister Crowley asked a friend, playwright and author Clifford Bax, to help him find an artist for a Tarot project.  Bax later arranged for Crowley to meet Harris over dinner at the Royal Automobile Club on Wednesday the 9thof June.  The following day Crowley consulted the Yi King, as he so often did, and received the Omen of 22 Pi—then recorded in his journal, “Cultivate Frieda.”  And thus, began a long and fruitful friendship which would forever shape their individual legacies.&nbsp;

On the 5thof May 1938, Crowley borrowed a copy of The Equinox Volume I Number VIII so he could lend it to Harris so she could read his essay, A Description of the Cards of the Tarot.  After Harris read it she suggested that they collaborate on creating a deck along the lines of the old Golden Dawn attributes. Crowley was in agreement and the hope was that they could complete the project in six months’ time.   A few days later, on the 11th of May 1938, Harris officially joined both O.T.O. and A∴A∴, choosing the motto Soror TzBA, meaning “hosts” and enumerates to 93.

Soon after they began to work on the Tarot, they realized that the traditional descriptions of the cards were inadequate.  Harris suggested that Crowley consider creating a more elaborate deck based upon his knowledge of the occult.  Crowley would of course take her suggestion and so they began corresponding and whenever possible, they would meet to discuss the project.  Crowley would regularly send Harris descriptions of the cards which at times included rough sketches.  Harris would then execute the work as per her teachers’ instructions and then present them to him later for approval.  This process repeated until each of the deck’s 78 paintings met with Crowley’s expectations. He would be demanding throughout the project, often turning away paintings he felt were in adequate.  This resulted in Harris having to repaint over a dozen images, including the Magus card which she is known to have painted at least seven times.  The pressure taxed their relationship but after five years of agonizing work, what is likely the most beautiful tarot ever executed—the Thoth Tarot—was complete.  Crowley would later write of the Thoth Tarot, “It is the vindication of my life’s work for the last 44 years; and will be the Compass and Power of the good ship Magick for the next 2,000 years.” In 1944 the Book of Thoth was published, and Crowley would acknowledge Harris’ contributions in the book’s Introduction, writing;

She devoted her genius to the Work. With incredible rapidity she picked up the rhythm, and with inexhaustible patience submitted to the correction of the fanatical slave-driver that she had invoked, often painting the same card as many as eight times until it measured up to his Vanadium Steel yardstick!

During this period Harris would contribute to other projects of Crowley’s providing artwork for several of his books, including the image of Tree of Life on the dust jacket for Little Essays toward Truth(1938); the sigil for the cover of Thumbs Up!(1941); The art for the first editions of Liber OZ(1941); Crowley’s portrait on the dust wrapper for Olla: An Anthology of Sixty Years of Song (1946); and in post mortem, the cover and frontispiece for Crowley’s funeral program, The Last Ritual (1948); and finally, the cover art for Liber Aleph: The Book of Wisdom or Folly which was first published in 1962.

Harris would remain in close contact with Crowley for the remainder of his life.  Sensing that the end of Crowley’s life grew near, she visited with him frequently.  On a few of these occasions she would sketch Crowley and several of these poignant drawings survive.

After Crowley’s death, Harris wrote to Frederic Mellinger, an O.T.O. member in Germany, on 7 December 1947:

He was well taken care of. I made him have a nurse about 3 months ago as he was dirty & neglected & he had Watson who was most devoted & the Symonds were as nice as they knew how to be. At the last Mrs. McAlpine & the boy were there. I saw him the day he died, but he did not recognize me. I think Mrs. McAlpine was with him but she says there was no struggle, just stopped breathing.

I shall miss him terribly

Love is the law, love under will

In her later years, she moved into a houseboat in Srinagar and began studying Hinduism.

Neither she nor Crowley would live to see the Thoth deck in production. It was not until 1971 before Grady Louis McMurtry working Llewellyn Publications would issue the first printing of the Thoth Tarot. 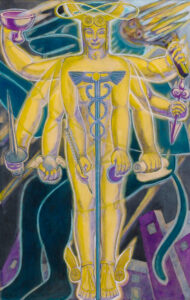 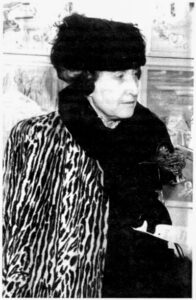 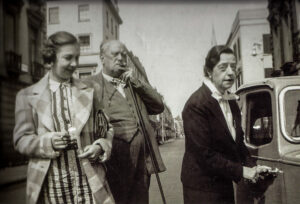 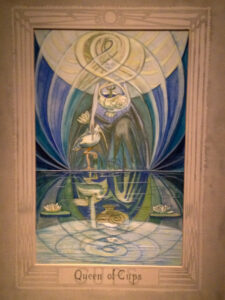 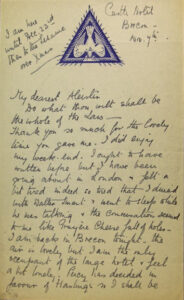